Tecate group offers a family of AC Safety Capacitors for X- and Y-class applications that require across-the-line and line-to-ground protection. This product is UL recognized and IEC 60384-1 compliant, and available in SMD and radial through-hole packages. These capacitors are ideal for providing surge and transient protection to sensitive electronic circuitry, as well as the users. These devices are also commonly used to filter EMI in power supply applications.

There are two major types of interference suppression/AC line filter safety capacitors, type X and type Y. The function of these capacitors is to protect against surges and transients, as well as providing EMI filtering. Safety capacitors are circuit-specific and serve to protect the circuit and the user from high-voltage surges by shunting the impulse energy to ground. One common cause of such surges is lightning strikes.

X Capacitors: Also known as "across-the-line capacitors." Class X safety capacitors are used between the "live" wires carrying the incoming AC current. These capacitors are used in applications where failure of the capacitor will not lead to risk of electrical shock to the user. A capacitor failure in this position will usually cause a fuse or circuit breaker to open.

Y Capacitors: Also known as "line-to-ground capacitors" (line bypass). Y capacitors are used in applications where failure of the capacitor could lead to the danger of electrical shock to the user, if the ground connection is lost.

X/Y Capacitors: Some safety capacitors come with a combination designation, for example, X1/Y2. This simply means that the capacitor can be used as an X1 capacitor in an across-the-line application or as a Y2 capacitor in the line-to-ground portion of the circuit. Tecate offers both X1/Y2 and X2/Y3 multilayer ceramic safety capacitors.

Typical Line Filter Circuit: Safety capacitors are shown at C1 and C2. C1 would be an X type, across-the-line capacitor, and C2 would be a Y type, line-to-ground safety capacitor.

During the certification process, two key tests performed are the impulse and endurance tests shown below. These are done to verify that the X/Y capacitor can withstand 10 impulses of alternating polarity, followed by a 1000-hour endurance AC life test. After completion of these two tests, the capacitors must still perform reliably in the circuit, under AC voltage conditions. These tests are part of the IEC 384-14 certification requirements. 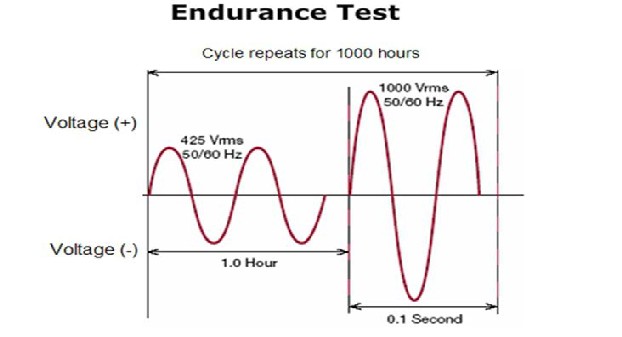 Filters EMI between tip and ring lines and ground. Telephone line noise must be filtered per EN55024.

Besides providing filtering, the safety caps must be able to handle any impulse voltages per the voltage rating table above.

X/Y capacitors are also used in the Isolation circuit in RJ11 applications, to create isolation between the Telephone Network Voltage (TNV) and the Safety Extra Low Voltage (SELV).

RJ11 applications use either X2/Y3 or X1/Y2 safety capacitors. The X1/Y2 offers better surge protection versus the X2/Y3 but would also typically be more expensive.

X/Y capacitors are used on the input, or AC side, of the power supply to provide EMI filtering.