Portable applications and digital technology have outpaced traditional chemical battery technology. A typical symptom of insufficient battery performance is the ratio of time the appliance is in use versus the appliance recharge time. Another nuisance is when a battery has to be replaced prematurely as it will no longer hold a charge. In these situations, using batteries in conjunction with ultracapacitors can improve overall system performance and extend battery life.

One reason batteries tend to need premature replacing is that, when a burst of energy is needed for an application, the high resistance of a chemical battery can cause the battery voltage to collapse. Ultracapacitors, in contrast, have a low internal resistance that allows them to deliver such bursts of energy with no damage to the ultracapacitor. This is because, unlike batteries, which discharge at a fairly constant rate, ultracapacitors act very similarly to traditional capacitors and will drop their voltage as they discharge their stored energy. When they are used in conjunction with batteries, ultracapacitors eliminate the instantaneous energy demands placed on batteries, and this in turn extends battery run time and prevents declining charge capacity as the battery ages. 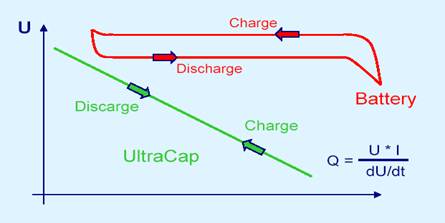 Also unlike batteries, ultracapacitors are maintenance-free and operate over a wide temperature range. They can be charged and discharged at the same rate, while batteries are limited by their slower charge rate. 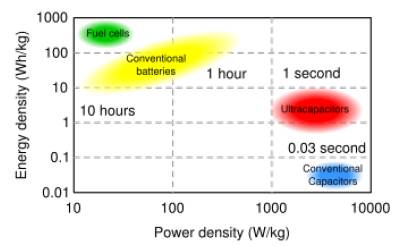 As can be seen in the chart above, ultracapacitors reside between batteries and conventional capacitors in terms of energy and power density. They are typically used in applications where batteries come up short when it comes to high power/life and conventional capacitors cannot be used because of a lack of energy. Ultracapacitors offer high power density along with adequate energy density for most short-term, high-power applications. The chart below offers a further comparison of the different technologies.

Ultracapacitors vs. Batteries and Conventional Capacitors