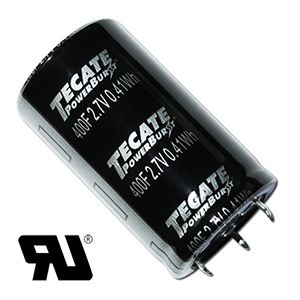 The TPLS series is optimal for use in storage, battery packs, wireless communications, mobile computing, and industrial applications. Among the parts’ most common employments are in RAID storage, smart grids, portable data terminals, peak-power shaving functions, and remote monitoring equipment. Moreover, Tecate’s PowerBurst ultracapacitors can be used in conjunction with batteries or other power sources when batteries alone do not meet performance objectives, such as holding or bridging power when the primary power source fails or when a battery is swapped out. They notably feature an operating temperature range of -40oC to +85oC at 2.3V, further making them a logical alternative to batteries in extended temperature applications.